The Realm of Wisdom

Foot in the Door, a large fibreglass work, which was in the poplar forest at n. In the

sculpture Foot in the Door, I created subversive biomorphic shapes garnered from

my interaction with the world. My forms are developed by strategies of automatism,

For the last two years the sculpture was located in Maboneng CBD, Johannesburg. At

the end of 2020 it was vandalised by individuals that illegally took over the building.

cage and destroyed the fibreglass base.

the artwork. They destroyed the cage that anchored the artwork as well as the tiered

wedding cake base. I took that as their decision as part of this collaboration and decided

not recreated the base or cage but rather make another metal base. I also

I re-named the artwork The Realm of Wisdom that connects with my new body of artwork.

Everard Read Gallery in Cape Town for 2022. The body of work is informed by the constructs

and symbolisms of cosmology from ancient cultures such as Egyptian, Mayan,

Norse, African and Native American traditions. I reflexively investigate the nature of

the expanding universe through the lens of myth and possibility. Specifically, I have

cosmology of Buddhism, Christianity, Hinduism and Kabbala. The cosmological structures

world and from personal space to social spaces. The artworks can be interpreted as a

road sign in this journey and convey messages and instructions. Inspired by the Norse

goddess Freya who was practitioner of seidr, the series can be seen as tools for the

practice, which is about "discerning the course of fate and working within its structure

to bring about change, often by symbolically weaving new events into being” (Freya

As such, through these various theological and cosmological influences, I explore the

concept of weaving ones fate, envisioning the future and then creating a present i 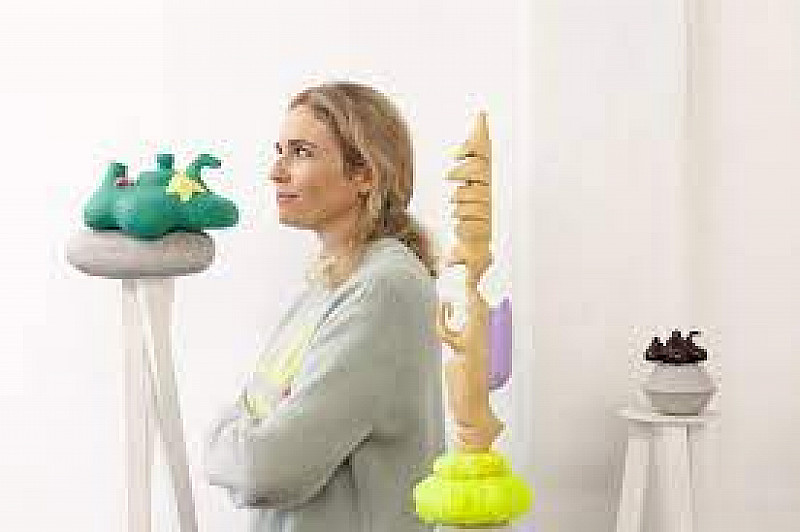 Sophia van Wyk has worked in the South African art industry for more than fifteen years, primarily as an Artist and Corporate Art Curator. Throughout her career she has had the opportunity to collaborate on various projects with different Universities and Art Institutions. She spearheaded various community engagement workshops and artists’ talks to the public.

In her sculptures and paintings van Wyk creates subversive and non- representational biomorphic forms that becomes a metaphor for ‘new meaning. Through these abstract sculptural and painted shapes she examines her interaction with the world with regards to current social injustices and her personal history and memories.

Her most recent solo exhibition was The Importance of Forgetting: a timeline of existence as part of the CUBICLE Series at Everard Read Cape Town / Circa Gallery from 5 to 17 August 2019. She presented her first two solo exhibitions in 2015 at the FADA Gallery and Hazard Gallery in Johannesburg. Van Wyk has participated in numerous domestic and international group exhibitions.  In 2016 she was invited to work at the Nirox Sculpture Park (Johannesburg) as part of a month long residency from May to June 2016. At Nirox she created a public sculpture (titled Cirrus 20.10.12) for the inaugural exhibition at The Cosmopolitan.

Early in 2017 she was selected for a three month long funded bronze casting residency at The Falconer Foundry from March to May. She was selected and funded by the Eduardo Villa Trust to participate in the El Ranchito residency at Matadero Madrid, Spain. Also in 2017 Van Wyk participated in two solo exhibitions. The first solo exhibition for 2017 was at Fried Contemporary (Pretoria) in March and Hazard Gallery (Johannesburg) in October.

In 2018 van Wyk was invited to participate in the American Express Winter Sculpture Fair at Nirox Foundation Sculpture Park and various group shows. Most recently she participated in L’Air Arts Residency in Paris from 16 to 30 October 2018. Currently she is participating in group exhibitions and working towards a solo exhibition.