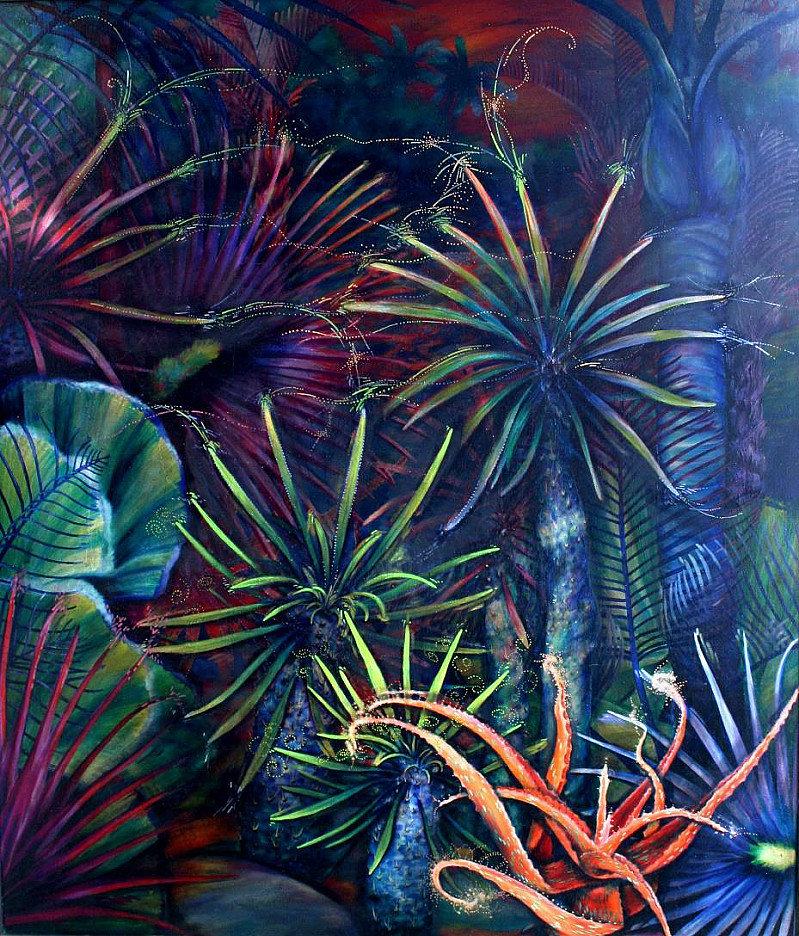 My art theme has, over decades, been about wilderness. The way that I have expressed this has changed at times, from imaginary and sybaritic Edens to post-apocalyptic wastelands, usually in tandem with my perspective of how the earth has been affected by anthropocentric dominance. In these oils on canvas I have engaged a type of Magic Realism and allowed myself to be seduced by the beauty of plants which lend themselves extremely well to the melding of both horror and fantasy.

Recently I was inspired to return to paintings that I had started decades ago (and set aside as incomplete) after becoming aware of how nature has a tendency to create new ecosystems and even sometimes (seemingly) revert to wilderness, when the human element has been removed. In 1986, due to reactor design flaws the Chernobyl Nuclear Reactor Plant in the Ukraine experienced a disaster rated at seven (maximum). A mere five years after the event the walls of the reactor began to be covered by fungi that were rich in melanin, the same element that protects human skin from the ultraviolet radiation of the sun. The presence of the melanin allowed the absorption of radiation and changed the fungi into a type of energy which encourages its growth. Fungi types which contain melanin are able to absorb the high amounts of energy in ionizing radiation and are able to convert it into something more useful for its own propagation, similar to photosynthesis.

In 2011 a massive tsunami wave slammed into a nuclear reactor in Fukushima, Japan, creating another high-radiation environment. Here too, radiotropic fungi, behaving like chlorophyll as an energy-harvesting pigment, have been found. Moreover, wildlife once again appears to be thriving in restricted areas or zones following the evacuation of humans. The debate among scientists over the effects of low levels of ionizing radiation on wildlife is heated and political. In the two mentioned disasters the most dangerous of the radionuclides released were plutonium and cesium-137, but the former has already passed its half-life; the latter has decayed into barium-137m which is relatively harmless.

I have entitled works related to this theme as “Restricted zone #1, 2 and 5” -the presence of radioactive peril as a trade-off for the absence and even the outright banning of humans as an imagined recovery of wilderness. But this is merely a ‘stay of execution’. It is an indictment of the human race that when, against all odds, wilderness organizes itself due to the absence of humans and becomes prolific as in these restricted zones, there is evidence of poaching in what have now become designated wildlife reserves.

Whereas the proliferation of wildlife and the commensurate recovery of wilderness in restricted zones does not exclusively imply that those are better off, it offers a window of opportunity for wilderness to create novel eco-systems and to, transiently perhaps, even seem unbroken.