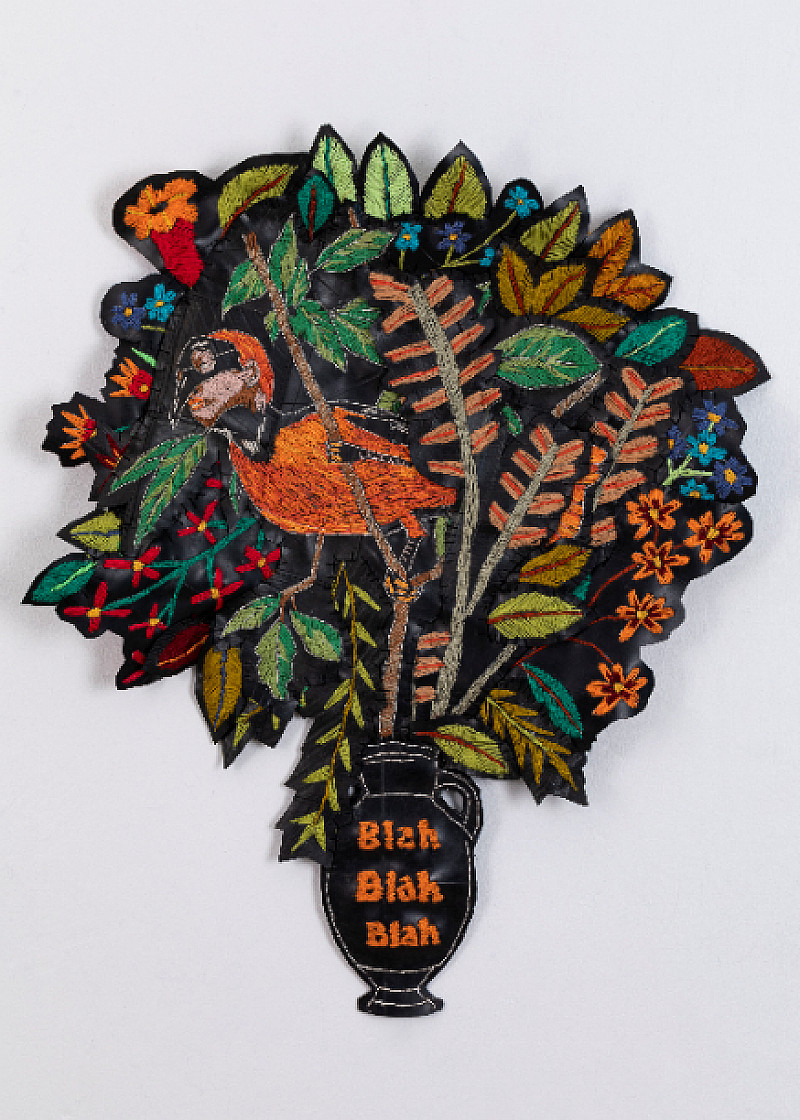 Hannalie Taute’s work is in a constant state of evolution, which mirrors many of the ideas behind her art. Her process is methodical and laborious, and the artwork depicts moments in time – capturing instances in which a non-traditional medium (in this instance, rubber) undergoes a violent process of change. She juxtaposes delicate cotton thread with industrial discarded inner tubes by embroidering items that can decay, such as flowers and flesh, with moments of violent disruption. The coarseness of the rubber is counteracted by the delicacy of the thread, but this is subverted, as often the stitching and composition of the rubber inner tubes are delicate, and the thread seems almost rough in its arrangement. The resulting organised chaos resembles our daily lives and external influences. One central theme, or unifying characteristic, is the repeated exploration of identity and/or relationships within her “paracosmic fantasy”. This so-called “paracosm” is a way in which the artist position herself in the real world.

Taute explores the paracosmic fantasy by means in which people often have many and sometimes conflicting identities to which they answer. “Art is some sort of interesting area where dysfunction is allowed.” *

This is perhaps most striking in her work from the late 2020’s titled: “Blah Blah Blah” a floral arrangement embroidered on rubber.  The words: “Blah Blah Blah” embroidered onto the vase was initially inspired by the title of a song performed by Dutch DJ and record producer Armin van Buuren. For Taute music in particular is not just a muse but also a thread that binds humanity together. With that said: the word Blah also refers to that feeling of an expression of mild frustration; and also when you are having the “blahs”, refers to a feeling of physical uneasiness, general discomfort, or mild depression. So please don’t let the threads that bind us give you the “blahs”

Hannalie wants the medium of the piece to interact with the subject manner in a way that forces the viewer to deeply engage and question the artworks, and she aims to create a moment of respite from the chaos while simultaneously illustrating it.

In 2000, she obtained a National Higher Diploma in Fine Art at PE Technicon (now the NNMU). Nine years ago, she started working with rubber and particularly repurposed rubber inner-tubes, and in 2012 she added embroidery to her list of preferred media.

Her first solo exhibition called Siembamba - let’s play pretend in 2004 was held at the João Ferreira Gallery in Cape Town, and since then, she was part of several group and solo exhibitions. Her recent solo exhibition (2020) was presented at the .M Contemporary gallery in Sydney, Australia.

Taute was a finalist in 2004 for the ABSA l’Atelier exhibition and a nominee for the Fiesta awards in 2012, 2015 and 2017. She received the Kanna Award for best visual art production at the 2014 KKNK Arts Festival for her solo exhibition called Rubber ever after. In 2017 she represented South Africa at the Museum Rijswijk Textile Biennale in the Netherlands.

Her work is part of various private collections as well as the academic collection of UNISA. Taute currently resides and works in Riversdale in the Western Cape.

2019:   “Awesome Womxn” at the Associaton of Arts in Pretoria curated by Dr. Adele Adendorff

2017:   “Bosch in Africa” at Stellenbosch Woordfees, curated by Sandra Hanekom

2016: “Desire” at Association of Arts, Pretoria, curated by Johan Conradie

2015, Dante Magazine, “A love affair with rubber by Heidi Rasch

2.       2012 Nominated for the ‘Kyk-net FIESTA” award as best visual art production at a festival (Skeidingsangs)

3.       2014  Winner of the ABSA KKNK Kanna award for best visual exhibition at the festival (Rubber ever After)

4.       2015 Nominated for the “KykNet Fiesta” award for best visual art production at a festival (Rubber ever after)